I am new to the Grishaverse. For months, the insanely gorgeous cover of Shadow and Bone has been taunting me on Instagram. I have bookmarked this cover and saved it, thinking “if and when I finally find the perfect person to design the cover of my book, I want it to look this amazing.” But it was this weekend that I finally got to dive into the new Netflix series. Now, a full three episodes in, I am struck by the question that the main character, Alina Starkov, keeps getting which is “What Are You?”. 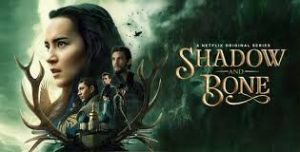 Alina is a half breed. She’s half Shu. Which makes her look different enough to not be the same, whilst not so different as to be a complete foreigner. And in some ways, the series at least, sets her up to be an outsider, by virtue of the way she looks and by the virtue of what those looks and the racial make-up that it represents mean.

This question that Alina is dogged by is one I’ve also had to answer to: “what are you?” There are so many flavors of this question that have followed me throughout my life, if perhaps less dramatically, but not any less impactfully.

Will I be looked down upon for not having a Texan accent?

That was my concern in Kindergarten in Houston, Texas, worried that others would notice my lack of a twang and think that I did not belong. This is my first memory of knowing that I was different, which isn’t so long after the path of my memories begins.

What tribe are you from?

In high school, a well-meaning woman in the bathroom of a dance studio in Glen Ellyn Illinois, actually asked me what tribe I was from, thinking I was native American after I told her I was Indian.

A classic question that was pitched to me in my early 20’s at Buckingham Fountain in Chicago. If memory serves it was Taste of Chicago weekend, and it was probably meant as a pick up line, but fell slightly flat, when the answer I gave was: Chicago.

I mean, you’re not really American, so you get it

The Europeans I met in grad school said this one a lot. And it was delivered as a compliment, as in, hey, we can all band together because we are all of the world where have experienced some version of lack of resources or lack of domination that allows us to be friends.

Go back to your country!

Thanks to our former President, millions felt completely valid in taking back their country for themselves, and one of his acolytes, complete with a MAGA hat at a Walmart in rural Pennsylvania, delivered this line while whizzing by on a motorized scooter.

Americans do things this way

That’s what a lot of the adults around me growing up said. They, although they had their citizenship, did things one way, and of course Americans, implying Americans who had been there longer than them, did things another, less desirable way.

What started with George Floyd last summer, and what brings me back to the cultural zeitgeist of the Shadow & Bone series, is this: we are now experiencing the othering of American culture, in which every single person now believes that they in fact, are an other.

And perhaps it is the case that the othering of society IS the goal, in which every single person is empowered to be exactly who they are, with all the overlapping identities and affiliations, posited at different points of time, that this implies.

It is a truism of New York City that what makes you cool here is being unique. You’ve got some unique way of being? Cool. We’ve got a place for you. You open up our hearts just a little bit, when we see you dressed the way you are, acting the way you do, out in public, just living your truth.

Friends, I do not know where Alina Starkov’s journey will take her, but I assume she will come into her own, grow into herself and find her presence in the world. And perhaps that is what we need now, is to embrace every aspect of our otherness that we can grasp, and scream at the world that our otherness is in fact a power to be harnessed and not a thing to be washed out, and turn it into our own.

By Priya Doty on September 9, 2022
I began writing in earnest five years ago and have recently completed my first fiction novel, "Finding Warrior Pose". A few incidents stand out in my mind as being influential in my decision to write a book. In my book "Finding Warrior Pose," I write about many things, including travel (I’ve been to over 30 […]
Read more

By Priya Doty on June 23, 2022
You’re envious of your friend because she can walk into any room and suddenly, all eyes are on her. She can attract people’s attention with her body language, the way she converses, and her overall confidence. But what is it that makes her confident? How can you develop these qualities in yourself? Is there life […]
Read more

Things You Didn’t Know About Yoga

By Priya Doty on June 23, 2022
Yoga is more than just fancy poses and stretches that the world knows it as. Whether you’re new to the exercise or just want to learn more, you’ve come to the right place! There are myriad of health benefits to practicing yoga and there are hundreds of things people don’t know about the ancient exercise. […]
Read more
1 2 3 4 Next »