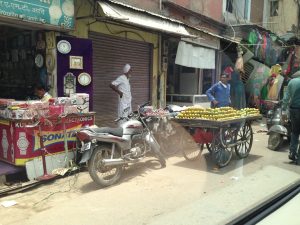 It’s Mother’s Day, and perhaps because it’s Spring, I’m thinking a lot about how vegetables – the preparing and cooking of them – factored into my relationships with the maternal influences in my life.

You have to start with 1980’s India, where vegetables arrived from the sabzi mandi (vegetable market) raw and imperfect.

Cucumbers require salting to remove bitterness. At least, the ones you bought in the open-air market, that had not been modified and specified to grow just so. So, as an eight-year old, I would sit with Nani after our breakfast, nashta, every morning in the summers when we visited, at her kitchen table, with its plastic sheet covering the nicer table cloth, preparing the cucumbers she loved to eat. She would cut the top off a cucumber, dab it in a pile of salt, and then rub the salt into the rest of the cucumber’s body. One by one. I asked her, why do you need to do this, and she said that the salt would work its way through the cucumbers, and make them less bitter to eat. The cucumbers were served as a salad with tomato, sprinkled with lemon juice and salt, and made a truly delicious and refreshing and water replenishing side for lunch later in the day, the main meal.

Peas, showing up in the ever-popular Punjabi dish, mattar paneer, needed shelling. You see they arrived to the concrete aangan, the doorstep, still sitting in their pods. To me, an American kid, pea pods had only ever been associated with Chinese food. The best stir fries had those fresh pea pods and baby corns and water chestnuts, the last two coming out of a La Choy can. But for mattar paneer, with its rich tomato broth that would drip down the sides of our buttered potato parathas, Dadi needed them shelled. So, she and I sat with our legs crossed on the ground in the front of the kitchen, in the courtyard, where we could catch a bit of breeze in the waning heat of the afternoon as dusk came on. Periodically, Dadi would separate the peas from the pods by tilting her stainless-steel tray so that the peas rolled downhill towards one place and then transport them to a bowl. Between Dadi and I, because her main language was Punjabi, and because my seven-year old language skills were not yet that advanced, this was a pretty awesome way to hang out.

Brussel sprouts were a specialty with my mother in law, a Southerner. The kitchen was her domain, and she insisted on no help other than entertainment and conversation while she cooked. We’d sit, as two adult women, getting to know one another, and discuss the best places to buy things, and the finer points of whether to buy vegetables at Aldi or Trader Joe’s or Sam’s Club or Patel Brothers and which were fresher and better all around. Now the brussel sprouts she made were not the sort that I ate growing up in the Midwest, frozen then boiled, that even lemon couldn’t mask the smell of. These were fresh and crunchy. Her recipe, which she kept on recipe cards in the pantry, included craisins and mustard and salt, and they came out on the table, served crunchy, roasted, salty and sweet.

Eggplant has become a signature dish for my own mother, bharwan baingan, or stuffed baingan. Now the sort of eggplant we ate growing up was the typical Indian kind, baingan bharta, which is a roasted, mashed eggplant with tomato. But then the new stove arrived and she wanted to use its roasting feature, and there were new varieties of eggplants showing up at the store, now that my mom had ventured past the American grocery stores to the Mexican grocery store, where the real veggies are sold. So, my mom decided to experiment and what she ended up with was a series of small eggplants, filled with a spice concoction that I will never fully intuit, sewn shut and roasted. They held up so well, that even when my mother visits me now, in New York, she carries them wrapped in wax paper packets, frozen, on the plane, and they still come out soft and spicy and oily, a true flavor explosion you have to try.

Butternut squash, after some trial and error, will be the vegetable that perhaps my daughter will associate with me. I simply love orange vegetables – squash, but also pumpkin and sweet potatoes. They are easy to cook, healthy, taste good, and have just a little sweetness. We figured out early on that our toddler too, really likes the sweet texture of butternut squash, and so boiling it, mashing it, instapotting it, and really doing anything with it, has become her favorite. I, unlike my grandmothers before me, buy it pre-cut, and packaged up in plastic, from the store downstairs, and still I complain it is hard to find the time to cook!

So why do we do it? Why shell the peas, salt those cucumbers, will brussel sprouts into a well-tasting vegetable, devise spice concoctions, and search for the perfect vegetable for our toddlers? For the enjoyment of it, obviously. Happy mothers’ day.

By Priya Doty on September 9, 2022
I began writing in earnest five years ago and have recently completed my first fiction novel, "Finding Warrior Pose". A few incidents stand out in my mind as being influential in my decision to write a book. In my book "Finding Warrior Pose," I write about many things, including travel (I’ve been to over 30 […]
Read more

By Priya Doty on June 23, 2022
You’re envious of your friend because she can walk into any room and suddenly, all eyes are on her. She can attract people’s attention with her body language, the way she converses, and her overall confidence. But what is it that makes her confident? How can you develop these qualities in yourself? Is there life […]
Read more

Things You Didn’t Know About Yoga

By Priya Doty on June 23, 2022
Yoga is more than just fancy poses and stretches that the world knows it as. Whether you’re new to the exercise or just want to learn more, you’ve come to the right place! There are myriad of health benefits to practicing yoga and there are hundreds of things people don’t know about the ancient exercise. […]
Read more
1 2 3 4 Next »